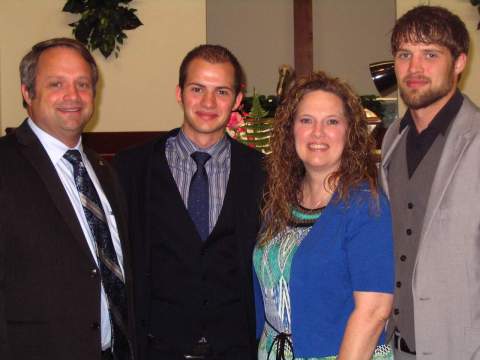 Pastor John was born to Chuck and Mary Sweatte who were missionaries on the island of Numfor in New Guinea.  His dad contracted a tropical disease which caused them to return to the States where he took a Co-Pastorate for a few years, hoping to return to the field.

Pastor John was saved on April 23, 1977.  Then the Lord called him into the ministry as a teenager.  God gave him a burden for young people, and he started working in children's church as well as preaching in a nursing home with his best friend Jimmy Morris.

It was under Pastor Ed Taylor that Pastor John served for over 12 years and began his Youth Pastor Ministry, Music Director Ministry, and eventually he became Pastor Taylor's Assistant Pastor.  It was during the early years that Pastor John and Pastor Taylor's oldest daughter Shelley began a special relationship that grew into true love and they were married in 1988.  God then blessed them with two boys, Paul and Charley.

God then called the Sweatte family into the camp ministry for several years, all the while still working in churches as Youth Pastor, Music Director and Assistant Pastor in their area.

In the last several years God began to lead Pastor John in a direction that he did not expect and that was back to Bible Baptist Church of Griffin.  In 2014 he became Co-Pastor with Pastor Taylor to help share the responsibilities due to Pastor Taylor's health.  The church voted unanimously for Pastor John to become the Pastor when Pastor Taylor retired, which took effect February of 2015.